The first time I EVER had Purple Cactus in Jamaica Plain was back in the Spring of 2004.  An ex-boyfriend took me there, raving it was his favorite burrito spot.  I remember the physical experience vaguely but two things stuck out:  my burrito’s size AND my burrito’s taste!  Flash-forward to 2014 and the eatery still stands remaining one of my FAVORITE burrito locations in all of Hub. 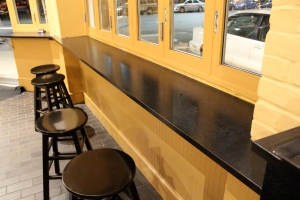 Opened back in 1999 this healthy take on California style burritos has become a neighborhood gem, getting reviews from Boston.com saying, “this place is the bomb!” and “fast food worth waiting for,” from the Boston Globe.  When the first location opened in Provincetown or “P-town” in 1993 the menu had only 3 burritos, chips, guac, and salsa.  Currently the menu has 8 sections, including breakfast, as well as side options.  Normal hours are 9am to 10pm daily with the full menu starting at 10am and Winter Sundays are 9am to 9pm.

I’ve tried the Vegetarian Chili, which was quite tasty containing a variety of Beans, Monterey Jack Cheese, and Tortilla Chips.  I was quite contempt with my small 8oz. cup. 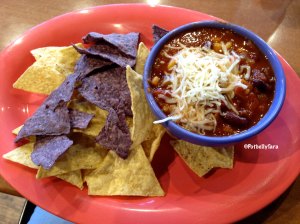 I’ve also done the Grilled Chicken and Grilled Steak burritos, but never the Shrimp.  Today was the day!  I ordered my Shrimp burrito with a Spinach tortilla wrap.  Other wrap choices are: white, wheat, none (in a bowl) or Red Chile (I want to try that next!).  I had to make it a “Super Burrito” so I added guac and sour cream on the side.  It was only $1.20 extra and VERY worth it!  For a drink I got my favorite, a Cabo Cooler, a.k.a Lime-aid.

If you’re more on the no meat or fish side they also offer salads and other vegetarian options, including TOFU burritos!

What really works for me here is that the customer isn’t skimped by any means with their food.  When your paying the extra for steak over chicken your getting good HUNKS of steak in your burrito, not thin strips.  Prices here vary with the highest priced item being $8.75 for the Carne Asada (Grilled Beef) with Peppers Quesadilla.  My total came to about $9.50, which for the size of these burritos isn’t too shabby.  I wasn’t worried about my shrimp quantity or quantity at all. 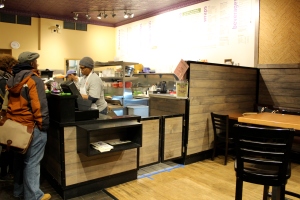 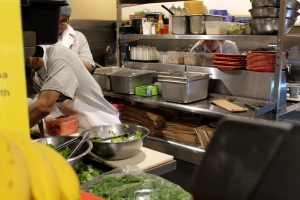 Turns out my Shrimp burrito was Fantastic!  The shrimp were as juicy and poached as described with about 4 nice sized shrimp in each burrito half! Sooo good!  My cabo cooler was refreshing as always.

Next time I think I’ll switch it up and order a Smoothie.  I wasn’t even aware they had those.  A Classic Blonde – Apple Juice, Bananas, and Strawberries- sounds good, with a Turkey Avocado Wrap.  Yea, that sounds sensational!

With Love and High Recommendation, 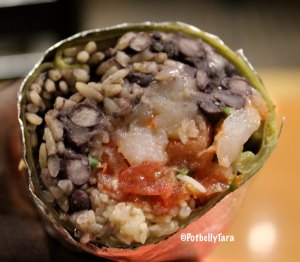