Shake Shack is HERE Boston, we finally have one!  Now I didn’t know much about Shake Shack when my interest was sparked coming back from New York on a Lucky Star bus passing the billboard in November 2012, but I can share a bit now.  It all started 2001 in New York City at Madison Square Park in Manhattan as a hot dog cart for a solid two years before they were able to make a permanent kiosk.  A hot dog cart. Really? I think that’s AWESOME!

My friend and I decided on Friday night, March 22nd to give the new Chestnut Hill location a try.  She already tried Shake Shack in Miami and wanted to compare, meanwhile I just wanted to try it since November period.   Although the line was about a 30-45 minute wait to get inside (yes, this is true) I honestly feel this is NOT your average burger joint that you’re waiting for.

What I like about the menu is it’s to the point.  There are 5 different kinds of burgers (1 being portabella mushroom), 4 different hot dogs, and 2 types of fries.  Perfect!  No need to worry about bringing your indecisive friends here.  Their price range works perfectly for the hungry Boston University, Boston College, and Pine Manor student being you can get a single patty cheeseburger as cheap as $4.75 and a double for $7.40 before tax.  The highest priced burger would be the Shack Stack which contains BOTH a cheeseburger and ‘shroom burger topped with lettuce, tomato, and ShackSauce for $8.95.

For frozen delights you have the choice between Frozen Custard [a dense dessert made from milk and flavors] or a Concrete [custard blended at high speed with a mix-in] from their popular choices or you can try a shake, regular ice cream, or a float. This will cost between $3.25 and $6.50 before tax.   Funny enough I didn’t want a shake on my visit like I thought I would when coming back from New York, but when I return I think I’ll have the Lobstah Shell [vanilla custard, lobster tail pastry shell from Boston’s North End, strawberry puree and ricotta cream] which you can ONLY get in Massachusetts.  Their drink list consists of non-alcoholic options as well as wine and beer (yes!).

My order was quite simple.  I got the ShackBurger, which is a juicy 100%-all natural Angus beef cheeseburger with lettuce, tomato, and ShackSauce that tasted to me like thousand island with mustard.  Different but Good!  I washed it down with a cup of ShakeMeister Ale, which is an Exclusive Brew for Shake Shack by Brooklyn Brewery.  Very impressive.  Dessert was chosen from the Custard Calendar for March (genius) which was half of a “Salty Chocolate Peanut Butter”. 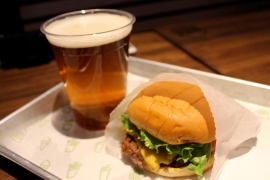 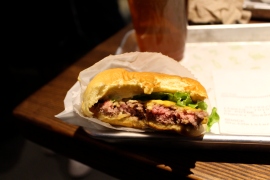 I must say, although that was the RAREST meat I’ve EVER eaten in all my life, it was Delicious!  The burger was quite juicy, which surprised me because it wasn’t a big patty.  The ShakeSauce complimented the burger by being not too bold but leaving a nice love tap to your taste buds.  The beer was a good light body beer.  Not too hoppy but still had a bite.  And then, I had the custard.  Umm, custard (insert Homer Simpson Grawl Here!).  The texture of the custard was like a thickened mousse.  Great balance of PB to chocolate with a hint of salty for contrast.

Being that this location just opened up I can see the line to get in remaining long for the next couple of months.  That being said, this REALLY Shouldn’t stop anyone who has a bit of time on their hands from going.  They even have two lines for people who just want something cold from those looking for food which is helpful to the person getting their custard and leaving right away.  The staff is so friendly and helpful.  One of the employee’s who was in charge of handing order’s to customer’s asked me my name.  When I replied, “Potbelly” he laughed and said, “Nice to meet you”.  I told him I’d review this location and he was glad to hear it.  Team members clear your table for you and ask, “how did you enjoy the food?”  A fast food joint with full service restaurant demeanor, love it!

The modern space is clean looking, organized, and makes good use of wood throughout the restaurant.  From the walls to the tables real wood is the theme with a nice natural finish.  Each table has a carving of either the symbolized Shake Shack Burger or a message like, “Handcrafted in Brooklyn, NY this surface was part of a bowling lane” which means, they RECYCLE!!!   The use of magnets for the menu board is very efficient so new products can get added to the space without disturbing much of the structure such as clothes or a new shake.

In the end I was highly impressed with Shake Shack and what they have to offer.  They have me as a customer whenever I can make it out to Chestnut Hill.  When they actually COME to Boston however, I think that’s when I’ll be VERY pleased.